Nepal is considered to be second richest country in water resources but still there are many places where people have to travel hours to fetch single bucket of water. However blue schools in Thumki VDC of Kaski District proved that when there’s need people will find a way out to fulfil the need.  People in Thumki VDC previously had to travel for almost an hour and another hour to get a bucket of water but the situation is quite different at least in schools. Thanks to International rainwater Harvesting Alliance (IRHA) and Kanchan Nepal who promoted rainwater harvesting system in few schools of the VDC.

A team of Pakistani delegates visited the schools on 26th June 2013 to collect information on ongoing activities and its contribution in improving issues of WASH in the community. During the interaction session among school management committee member, project proponents and Pakistani delegates at Jateshwor Secondary School, Nirmal Adhikari, project coordinator at Kanchan Nepal said “A school should be a place where children wishes to go and do not run away. We have tried to develop blue school in same way.”  Thumki VDC previously had issues of water and sanitation but now after school has installed rainwater harvesting system, at least students get enough water to drink and for sanitation. “Around 60000 litres of water is collected in 5 tanks constructed in the school premise which is used for drinking and sanitation in the school and also is supplied to some of the households nearby occasionally” informed Tirtha Raj Neupane, Principal of Jateshwor Secondary School. The project proponents are satisfied that the project has brought significant changes in using water and improved sanitation in the area. However they are also continuously being requested by the community to help in installing rainwater harvesting system in their household. “Children have access to enough water for sanitation at school which they do not have in their house, this has invited some problem and obliged parents to manage enough water,” added Tirtha Raj Neupane.

Another delegate Syed Mahazan praised the activities in blue school and said, “Blue school in Kaski are very impressive. I am from hilly region; though water is enough in my place its management is not proper. If Rainwater system can be installed and utilized properly, it’s possible that we will never face problem of water.”

The Pakistani delegate were on a week-long (25 June to 1st July 2013) visit to Nepal to collect information on WASH activities in Nepal and is expected to disseminate it in Pakistan.

With the trust between the local people and external agencies and their joint effort, total of 22 RWH systems have already been constructed in this community solely for recharging a nearby community recharge well. From 13 rooftop catchments and 9 surfaces run off catchments, the rainwater is being recharged. Even the storm water is being managed and recharged in this well. 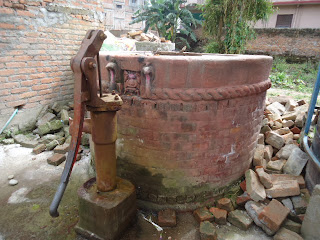 
The RWH system has definitely been beneficial to the community and its people yet during the months of March and April, the recharged well tends to dry out. The community people are forced to buy tanker costing them approximately Rs.600 per 1000 liter per month in average. Even though they have their complaints, they believe in years to come the well will be recharged enough and they can fully rely on the community well for water. What is more inspiring is the faith of the community people on RWH that it indeed is going to fulfill their water demand. They have all the right reasons too to have such faith...
Posted by Unknown at 21:52 2 comments: