By Saleem Shaikh and Sughra Tunio
ISLAMABAD (AlertNet) – Fatima Batool lives in a two-story house in a posh residential area of Islamabad that features shiny air-conditioned shopping plazas and restaurant-lined streets.
But for the past two months, she has been lacking one key thing: water. As the reservoirs that supply Pakistan’s capital with water run dry, so has Batool’s tap.
“It really feels traumatic, like living in a village, when one has taps like this without water for weeks,” said the 34-year-old mother of three, as she tested a tap in her courtyard without success.
Her children, anxiously scratching their bodies, have gone without a bath for the past two weeks, she said.
“This is first time that our neighbourhood has gone without water for weeks since we moved here from Lahore,” said Batool, who has lived in Islamabad for 10 years.
An escalating water shortage in and around Pakistan’s bustling capital has been caused by population growth and a combination of failing rains and high temperatures which experts link to climate change.
SURGE IN DRILLING
The shortages, and growing demand for water, is leading residents who can afford it to drill boreholes, while others are forced to buy what they need from private water tankers charging exorbitant sums.
Afsar Ali spent 150,000 Pakistani rupees (nearly $1,600) drilling a borehole outside his house in June to supply it with groundwater after the piped water supply almost completely ran out the previous month.
“Previously, I never felt the need (to do this) during two decades of my living here, as there was no tap water shortage in the entire city,” the 61-year-old said.
Batool’s husband Bilawal Khan said he complained about the shortage to the Capital Development Authority, but the tanker it sent in response came at night and could not reach his house because of cars parked in the street.
Islamabad, situated in the scenic Margalla Hills in the country’s north-west, once received abundant rain throughout the year. For the past 10 to 12 years, however, rainfall has declined, although until now the resultant water shortages affected mostly poor and middle-income neighbourhoods.
But with too little rain to adequately recharge the underground aquifers and the large reservoirs that provide water for the city and nearby areas, the water shortage is for the first time affecting even upscale areas.
Temperatures, which until about a decade ago rarely soared beyond 30 degrees Celsius (86 Fahrenheit), now reach as high as 48C (118F), causing demand for water to skyrocket.
“Rising temperature during summer days is a major cause of why water shortages have become routine for the last few years,” said Ghulam Rasul, chief weather scientist at the Pakistan Meteorological Department.
He added that local factors such as the doubling of Islamabad’s population since 1998 to 1.7 million, the increased numbers of vehicles, and excessive tree-felling have also contributed to the change in the local climate.
SUPPLY DRAMATICALLY DOWN
Islamabad and its adjoining areas including Rawalpindi need 198 million gallons of water daily, but only about 27 million gallons are currently being supplied, according to the Capital Development Authority (CDA).
The Simly, Rawal and Khanpur dams, located between 25 and 40 km (16 and 25 miles) from Islamabad, are holding too little water to maintain an adequate supply to the metropolitan area.
Asim Saeed, executive engineer of the Khanpur dam, said that water flow to Islamabad and the vicinity is down to less than a third of the previously normal volume.
“If the present situation persists for a few more days the dam will go completely dry,” Saeed said, blaming unusually poor rainfall in the catchment area over the past several months for the falling water levels.
Ramzan Sajid, a CDA spokesperson, said that the agency was receiving over 1,000 complaints of water shortages from residential sectors every day.
“With all rain-fed reservoirs that provide the city with water at their (lowest) levels, nothing can be done to offset the severe water shortage,” Sajid said. “We can only wait for the rain that can help improve the situation.”
Underground water is becoming harder to access as well.
“Only 10 years ago water could be found 50 to 100 feet deep in most of the capital city, said Abdul Hafeez, the Pakistan representative of WaterAid, an international nongovernmental organisation.  “But today, people have to bore 250 to 300 feet down to extract water,” he said.
Allowing people to dig for water on their own is a serious mistake on the part of Islamabad’s civic authorities, according to Hafeez, because it speeds up the depletion of the aquifers.
Hafeez believes that the solution to the burgeoning water shortage lies primarily in rainwater harvesting and in campaigns to raise awareness about water conservation.
Many residents traditionally wash their sidewalks and cars each day, sending water flooding down the city’s streets. Changing people’s attitudes and traditions will not be easy, Hafeez said.
“The government should make legislation against such wasteful behaviours and make a national rainwater harvesting policy,” he said. Such a policy should require rainwater harvesting systems for every household in Islamabad and in parts of the country with adequate rainfall, he explained.
Hafeez also recommended that each household with boreholes be taxed and the revenue used to fund awareness-raising campaigns and water conservation projects.
Saleem Shaikh and Sughra Tunio are climate change and development reporters based in Karachi, Pakistan.
Posted by Saleem Shaikh at 07:56 3 comments:

ISLAMABAD, Pakistan: Hotter temperatures, shifting rainfall and growing population are reducing the amount of available water in Islamabad. As dams dry up, people are drilling more borehole wells and trying to find other answers.

He said Pakistan’s government should pass legislation outlawing wasteful use of water and institute a national rainwater harvesting policy.

WaterAid -UK’s Hafeez believes that having rainwater harvesting in each household in Islamabad and other parts of the country should be made obligatory.

Watch more in this short documentary...

Posted by Saleem Shaikh at 10:16 No comments:

Judicious rain water harvesting and smart agriculture, the need of the hour in India

It is a frightening scenario in India. I have just returned from ESOF2012 in Dublin, UK, where the famous rain, kept us indoors for most of the day. There seemed to be no dearth of water and one was soaked if you went out unprepared. Then I come home to India where the monsoons seem to have played truant and so our water supplies in the reservoirs across the country have depleted to alarming levels. According to figures which have been released by the CWC (Central Water Commission) the situation is precarious because the monsoon has delivered normal rainfall to only one-third of the country. The total deficit so far this season is 22%, but rainfall has been 40% below average in key crop-growing areas in the north and northwest. India's 84 important reservoirs are filled only to 19% capacity, which is 41% lower than last year. 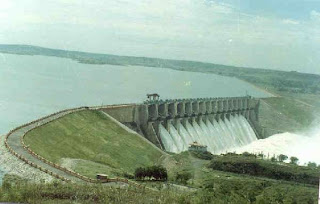 Sitting in at a session at ESOF 2012, where the discussion was on whether we can feed 9 billion people by 2050 or will we starve, the focus by several speakers was on the availability of water in the developing world and that it is in the developing world, where the bulk of the 9 billion will be. Bill Davies a water expert from Lancaster University and Jonathan Jones from the John Innes Institute, UK, spoke about the key challenge of how to enhance food production in the face of limiting water supply.
Bill Davies spoke about his experience in China where there is excessive use of water for growing of rice the staple crop. “ One kg of rice needs 2500 litres of water to be grown and China has even depleted its ground  water table so where does it go now? One third of fresh water is used in irrigation,” he said, “ so if there is less water we must learn to use less,” he said. He talked about manipulating root growth characteristics of the rice plants and he has experimented successfully with watering one furrow and leaving one furrow dry, thereby saving water and still keeping the crop yield stable.
Jonathan Jones echoed the use of less water and also using geneticlly modified (GM) crops which he believes is the answer to the food crisis which will hit our planet with the current system unsustainable system of agriculture. Both scientists felt the transference of science to the field level is necessary for smart agriculture. With a combination of science and agriculture they say man has hope, to feed the projected 9 billion population, which will cover our planet by 2050.
In India, the reservoirs are filled by harvesting of the monsoon rains from June to September. The storage in the Bhakra dam, which irrigates the bread basket states of Punjab and Haryana, is barely 22% of capacity, down from 48% at the same time last year, forcing the Bhakra Beas Management Board to cut water supply by 10%. This will hit paddy and coarse cereals sown in these two states. Depleted reservoirs and weak rainfall can hurt winter planting, because fields would have inadequate moisture and crops sown after the monsoon, depend almost entirely on water flowing out of reservoirs.
The planet is at a crucial time of its existence, when rain water harvesting has not only to be maximised, but it also has to be carefully and judiciously used and it is scientists like Jones and Davies who travel to educate the farmer at the grass root level, to understand the need for smart farming practice.
Marianne de Nazareth
(The writer covered ESOF 2012 as a Robert Bosch Fellow)
Posted by Marianne de Nazareth at 02:24 4 comments: