The Nagarajan house on Sarakki Main Road, JP Nagar 1st Phase, Bangalore looks just like any other house we commonly see in Bangalore. Built in 1981, on a 60 ft x 40 ft site, the single storey house was, at that time, at the southern most end of Bangalore city limits.

While building the house, no provision was made for rain water harvesting (RWH). “We built the house as economically as we could. I was working in HAL Hospital (located near the HAL Bangalore Airport at that time) so we did not need to worry about accommodation as we had the doctors’ quarters, but we wanted to build a house where we could live after my retirement. I took loans to buy the site and build the house.”, said Dr Nagarajan. The rain water from the roof and compound flowed off into the storm water drains which in turn flowed into the main canals and finally into the lakes of the vicinity. “Many people dig wells before construction of their houses, but we didn’t spend that extra amount on a well either.”, said Dr Nagarajan.

After construction, the house was given out on rent for several years and the family moved there only in 1995, after Dr Nagarajan retired. A few months after they occupied it, they installed solar panels. “The Electricity Department was publicizing use of solar panels and they were offering a subsidy to those who installed it in their homes. Even in the summer we need hot water to bathe, so we felt that a solar heater would save electricity.  So we got it done.”, says Dr Nagarajan. The solar panels eliminated the need to use the geyser for most of the year. “Just a little sunlight during the day is enough to provide sufficient hot water for four to five people to bathe. Only on really cloudy days do we need to use the geyser.”, said Dr Nagarajan.

In 2003, a second storey was added to the house. Though there was the inclination to save nature’s resources and use them wisely, RWH was not in Dr Nagarajan’s thoughts. “While construction was happening, it did not occur to us to do rain water harvesting. We also did not feel the need for an extra water source as there was sufficient supply of corporation water.”, said Dr Nagarajan. 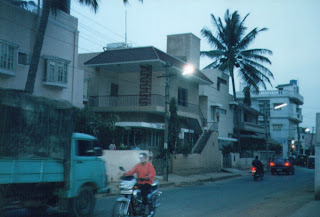 Over the next few years, the city limits extended several kilometres south. Increased population had its impact on water consumption and water started becoming precious. As a safeguard, people started digging wells and bore wells in their compounds. Dr Nagarajan too tried to get a bore well dug. While drilling into the earth, pebbles started getting extracted after just a few metres and the loose soil gave way. The bore well idea had to be abandoned and Dr Nagarajan incurred a loss of a few thousands of rupees.

Water shortage apart, the monsoons created havoc in parts of Bangalore because the rain water had no where to go. Low lying areas were getting flooded and water entering people’s homes was not uncommon. It still happens.

In 2007, the Bangalore Water Supply and Sewerage Board (BWSSB) started encouraging people to do RWH in their houses. New constructions had to mandatorily show it in their plan before they received permission to build. For existing houses there were no mandatory requirements until the BWSSB Amendment Act of August 2009. According to the Act, RWH was made mandatory – Every owner or occupier of a building having sital area of 2400 sq ft and above or every owner who proposes to construct a building on a sital area of 1200 sq ft or more, shall provide a rain water harvesting structure for storage for use or for ground water recharge. The deadline given was 27th May 2010. It was mentioned that if people failed to implement RWH, they were liable to have their water supply turned off. Plumbers were specially trained by the BWSSB to help people in making their houses RWH compliant.

Dr Nagarajan wanted to meet the compliance deadline but he was not sure how complicated implementation would be, given that the house was not designed with RWH in mind. He found a plumber and together they worked out a design for RWH in the house. Dr Nagarajan decided that he would store the water for use so he invested in a 2000 litre tank. The over flow would be directed into the ground for recharge. The terrace catchment area of approximately 1000 sq ft, was generally quite clean and free of leaves so there was no need of a filtration system. Having worked out the plan, it took just a day to do the piping and complete the RWH for the house.

Retro-fitting RWH into an already existing house seemed challenging, but turned out to be quite simple. 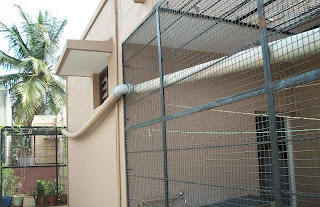 Piping to carry rain water from the first floor terrace to the water storage tank. 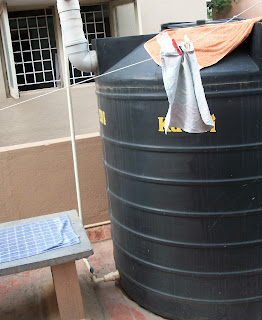 A 2000 litre rain water storage tank. Note the wide inflow pipe (on the top) from the terrace and the narrow outflow pipe (at the bottom). 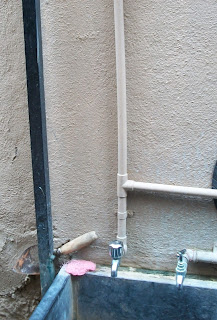 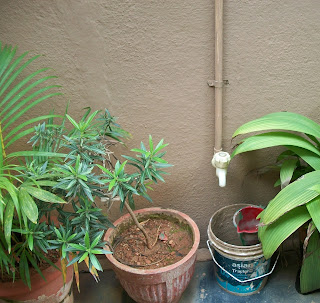 One pipe from the rain water storage tank is accessible in the front yard.

“We did RWH because it was a requirement of BWSSB but we are happy we got it done because we are conserving water. Rain water is pure. We use the water for washing vessels, mopping, washing clothes, watering plants, car cleaning… all purposes in the house except cooking, drinking and bathing.”, said Dr Nagarajan. “There are no maintenance costs and RWH has reduced the monthly water bill by about Rs 100/-. The satisfaction we get when we use the harvested water cannot be expressed.”

The initial deadline for implementing RWH (27th May 2010) kept getting extended by the BWSSB and the last deadline was 31st March 2012. However, there are still innumerable houses that still have no RWH in place. They don’t know what they are missing! Maybe Dr Nagarajan’s experience will encourage them to do their bit to catch precious water where it drops.

“ The whole experience has inspired me,” says Ramsy Pinto a young engineer from IBM. “What initially started out as a knee jerk reaction to the BWSSB notification for mandatory RWH in my house, has instead taught me the true benefits of harvesting the rain. Now I will fit the same system in my house in Mangalore and enjoy the benefits there as well.” 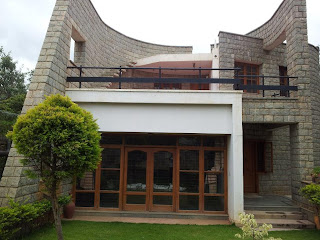 For me a journalist who writes to educate and push the need to RWH in Bangalore, India, where fresh water is becoming a huge problem, every convert is a huge step in the right direction! Now Ramsy will help me get the word out to his connections and in the RWH arena, the spread of the concept by word-of-mouth is the best method. Ramsy and his little family live in a large house in Hennur, Bangalore with a manicured garden. “We buy water in tankers at Rs 250/- per tanker and I need 8-10 tankers a month for our home and garden needs,” explains Ramsy. What was initially planned along with his land-lord was the rainwater was going to be channelised to rejuvenate the ground water. There were certain guidelines which the BWSSB had set down including re-charging the ground water table with the rain water collected. If this was not done,the BWSSB had threatened that no ‘regular’ government supplied connection would be given to the house, once Cauvery river water began to be piped to the area.It was really just a stop gap arrangement to show the BWSSB that they had complied. 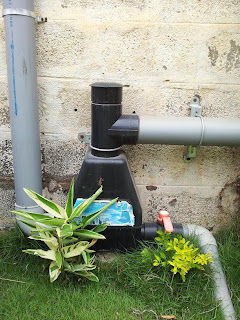 “ The first few quotes to undertake the job,we got from specialists were in the region of one half lakh and above. Then we were lucky to get this retired engineer named Jeff D’Lemos who quoted such a tiny figure, we were unsure if he could handle the job,” said Ramsy. Jeff looked at the three drains on the roof of the building and checked which drain took 50 – 70% of the water down. Then Jeff bought three lengths of PVC pipe of 6 inch diameter and a filter authorised by the government of India and fitted them. The rainwater is filtered and then goes straight into the sump and is used for all the requirements of the house. 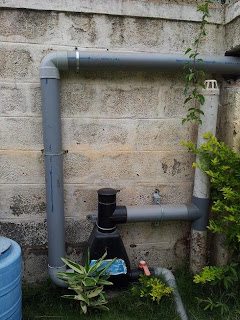 Ramsy and his wife Shobha are so pleased that now for five months of the year they do not have to buy any tankers of water. Instead they get fresh and pure rain water. Of course they have to keep the terrace clean and release the first flow of rain water collected incase its got a lot of dust off the roof. After that the filter does its job and they get an ample supply of water to fill their sump. You can almost hear his chuckle of delight when he tells you that in the first year itself, not only has he got back his investment of Rs.15,000 he also feels he is doing something to cut back on depleting the ground water table by pumping the excess rainwater to the borewell in the premises. 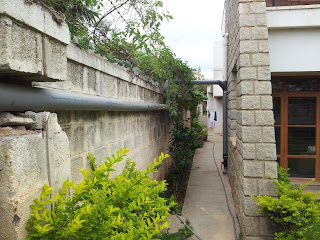 As one can see in the pictures, the rains have brought welcome relief and also a strong advocate for RWH in Ramsy who will happily pass the word around about its efficacy and why all of us have to help ourselves rather than whine about water scarcity in the city of Bangalore. 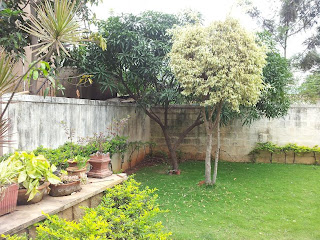