At last the rain has filled the RWH tanks in Bangalore!

It’s been weeks, no months and we have been waiting anxiously for the rain in Bangalore, India. By now we are usually awash with almost daily downpours through June and July and there is plenty of rain all round, to have the gardens and roads, all washed and sparkling of the regular dust and grime, in this Asian city.

This year however, Climate Change has been lurking in the back ground, and finally exploded in our faces, granting us dry and sunny days through June and July, with just the odd sprinkling of a shower. Where were our monsoons? The farmers ae worried, the met station is in depair and Karnataka is going to consider declaring our state in a state of drought. Are we heading for a catastrophic drought scenario, everyone wondered.

Fresh water is hard to come by for so many new million homes that have sprouted up across the outskirts of Bangalore. Its frightening because there are more buildings and homes to cater to than there is fresh water.

Frighteningly, a sort of water mafia has taken over Bangalore city now, deciding the astronomical rates to be paid for fresh water tankers. How are people to live? They have to fork out this money and these greedy shadowy figures have held the city to ransom. The government turns a blind eye as they cannot supply more water to cater to these homes. What used to cost Rs 150 a few years ago for a tanker of water, now costs anywhere from Rs350 to Rs 500 in the city of Bangalore.

But there is a silver lining in the midst of this looming crisis situation. Yes! the government of Karnataka has made it mandatory for new buildings to build and maintain, Rain Water Harvesting systems. They will not be issued certificates of possession, unless this is adhered to which is an excellent move. For me as a journalist who has been writing on RWH for years, it was a positive move and in the right direction. Only by making measures like these mandatory will people spend on installing RWH mechanisms which cost money and which they do not want to spend. 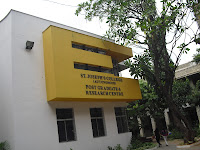 Two years ago there was money left over after a seminar in college and I told the director that the money should be used to install a RWH system in the college. The principal then was a far thinking man. He added to the 20 thousand we had saved, along with the college contribution which was over one lakh and installed a large tank and RWH piping for the building.

Last night it rained and it rained like the monsoons had finally come. There were roars of welcome thunder and brilliant flashes of lightening, which is music to my ears. I stood at the windows of our home and thought of all the RWH tanks merrily filling up across the city. My face lit up because instead of the precious water just running down roads and flooding low lying areas, at least some of the precious water was being harvested across the city. 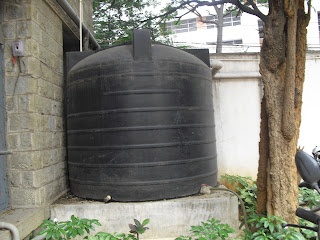 In my mind the huge tank in college floated up and there was a joyous feeling that it was going to be filled that night, hearing the welcome force with which the rain was drumming on my roof. The water is used to clean the toilets, water the gardens and wash the common areas in the college. It was a great feeling and I wonder how many Bangaloreans across the city felt the same way as I did.

By Newton Sibanda
LUSAKA, Zambia- RAINWATER  Harvesting (RWH) has been a practiced since time in memorial. It has, however,  been practiced at different levels- domestic and agricultural use, which are referred to as  the blue and green water use respectively.


However, Zambia Rainwater Harvesting Association (ZRHA) Secretary General Bob Muzyamba says the scale of utilization of RWH in Zambia’ leaves a lot to be desired’.


“Since 1998, Zambia has been involved in many meetings, workshops, collaborations and protocols relating to RWH in the SADC (Souhern African Development Community) region to respond to the effects of the drought hitting the region.


The Ministry of Agriculture together with the Ministry of Local Government and Housing as well as the Ministry of Energy and Water Development  were engaged by the Zambia Rainwater Harvesting Association to explore ways of enhancing the utilization of RWH as an appropriate technology for the effective use of water as a resource,” said Mr Muzyamba.

Zambia has been experience erratic rain fall partners for the past 10 years which have affected the  predictability of the rain pattern and planning.


Mr Muzyamba says the association has tried to align itself with Government policy to ensure that the knowledge and skills reposed in it can be recognized and utilized.


“There is a huge potential of Rainwater Harvesting in Zambia in all regions or zones. The potential is in flood control and drought control on one part, and water conservation on the other part,” he said.
Mr Muzyamba is also acting president of the association after the demise of the incumbent,  Joyce Musiwa as per its constitution.
Posted by Vusa's blog at 06:20 2 comments:

Many call her a traditional woman because she still believes that every family should harvest water when it is rain season for future use.

A practice, she learnt from her grandmother, Grace Businge says that it is shame people in Uganda to decry the scarcity of water, while God bless  us with the most rain patterns in the world. 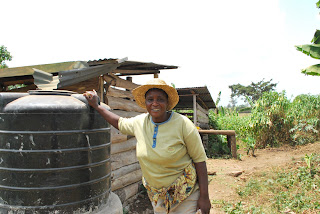 She has place tanks in every house that has a facility to tap water including the roofs of her pig, poultry houses and latrine to stock water for future purposes.

“Right from my childhood I knew that harvesting rain water can save time, women and children who trek long distance in search of water during the dry seasons,” she says.

Businge, 49, a resident of Nsoro I, Kitereza ward, Kijura town council in Kabarole district says that the prolonged drought has not affected her because she stocks water and use it to irrigate her crops while others are crying.

Businge has no kind words for women who have abandoned the practice of harvesting water in the name of modernity.

She says that if women were harvesting water, Uganda would not have had the food crisis and increase in prices would not surface.

“I was hearing people crying that food is becoming expensive but my family was not affected because I has enough millet, beans, maize, dry yams, cassava, obutuzi (mushrooms), and others things in stock. All my crops are green as you can them because I had to irrigate them,” she says.

Businge also save the money she would have spent on water bills and she constructed an underground tank of 50,000 litres to tap rain water.

“Harvesting water is very important for every family; it’s a cheap way of getting clean water. It also save them from searching for water during dry season like now we are experiencing,” she adds.

Posted by Hope Mafaranga at 07:40 No comments: