A rain ‘train’ into Bangalore’s lakes 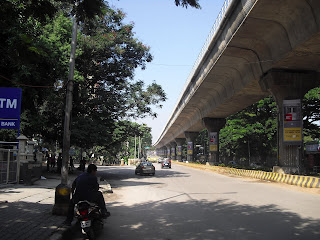 The Metro on MG Road All it needs is a little human ingenuity to be able to help ourselves overcome our water problems in Bangalore. Bangalore sports the ugly new Metro through our city streets and whenever it rains, sheets of water cascade down the raised platform from all sides, on the hapless people and the road below. Now, the managing director of the Bangalore Metro Rail Corporation Limited (BMRCL) has announced that as per the RWH plans for the Namma Metro Phase II plan, besides the percolation pits where the rain water recharges the ground water, selected lakes along the route of the Metro will be recharged directly using a network of viaducts,with rain water collected to help rejuvenate them. 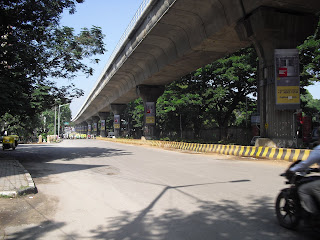 At a recent FKCCI (Federation of Karnataka Chamber of Commerce) Mr Sivasailam said the BMRCL will conduct this drive as part of their Corporate Social Responsibility acitivity. “ The two lakes which have been selected are the Kengeri Lake on Mysore Road and the Veerasandra Lake along Hosur Road. Experts are being consulted to help execute the plan. Depending on the success of this experiment we will gradually extend this to other lakes as well, which come along the Metro corridor,” he said. Talking about the quantity of water that can be collected by RWH from the Metro platform he said, “ if 42 km is the length of the corridor, multiply it by the 10 meters width to get the amount of water that can be collected. The second phase of the Namma Metro which is still to be completed is 72 km which can collect far more water than this phase,” he said. 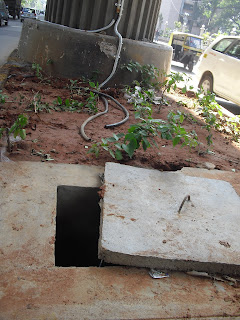 The percolation pit Since the water collected can contain a lot of particulate matter, it will be treated before being released into the lakes.This will be a great boost to the quality of water now in the lakes which most often than not is unadulterated sewage from apartment blocks nearby, or run off from industrial units around the lake. This RWH was not attached to the Phase I of the Namma Metro as the pipeline network has to be incorporated in the design stage itself. But the water being collected in Phase I was not being wasted he clarified, but being channelised into the percolation pits and being used to water the plants decorating the medians. 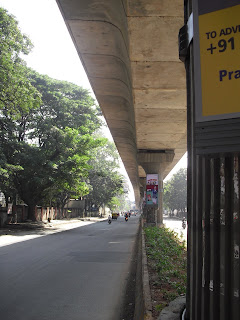 The plants on the median watered by RWH All pictures by Gregory de Nazareth
Posted by Marianne de Nazareth at 22:17 4 comments: